Giger was so impressed by his visit to New York that he created a series of paintings of this city.
In 1982 a Portfolio was published with five lithos. The "NY Torso" is one litho of this portfolio and was the begin from my Giger collection inspired by the "Lord of the rings"  epic, Giger created in the mid-1970s some works about it.

The print above ( published in 1975 with 99 copies )  shows a typical of Giger biomechanical landscape,

in which biological elements with technology seem to merge.

Like a world in which nature take place over a long forgotten technology.

A very expressive and impressive work The "Biomechanoid69" is one of the rarest graphics that exist of Giger.

Appeared in 1969, in a planned edition with 150 pieces, exist  from  this large-format graphic  probably only a handful copys.

Whether the most copies get lost  during a fire disaster at the Publisher, or the full number of the planned edition was not even printed,

it is definitely fact that there are only very few copys of this graphic exist.

The few known copys of this graphics are dedicated from giger for selected people.

My copy, that is in a excellent condition, is not dedicated but its marked from Giger with  "AE" so this copy was sperated for the artist. 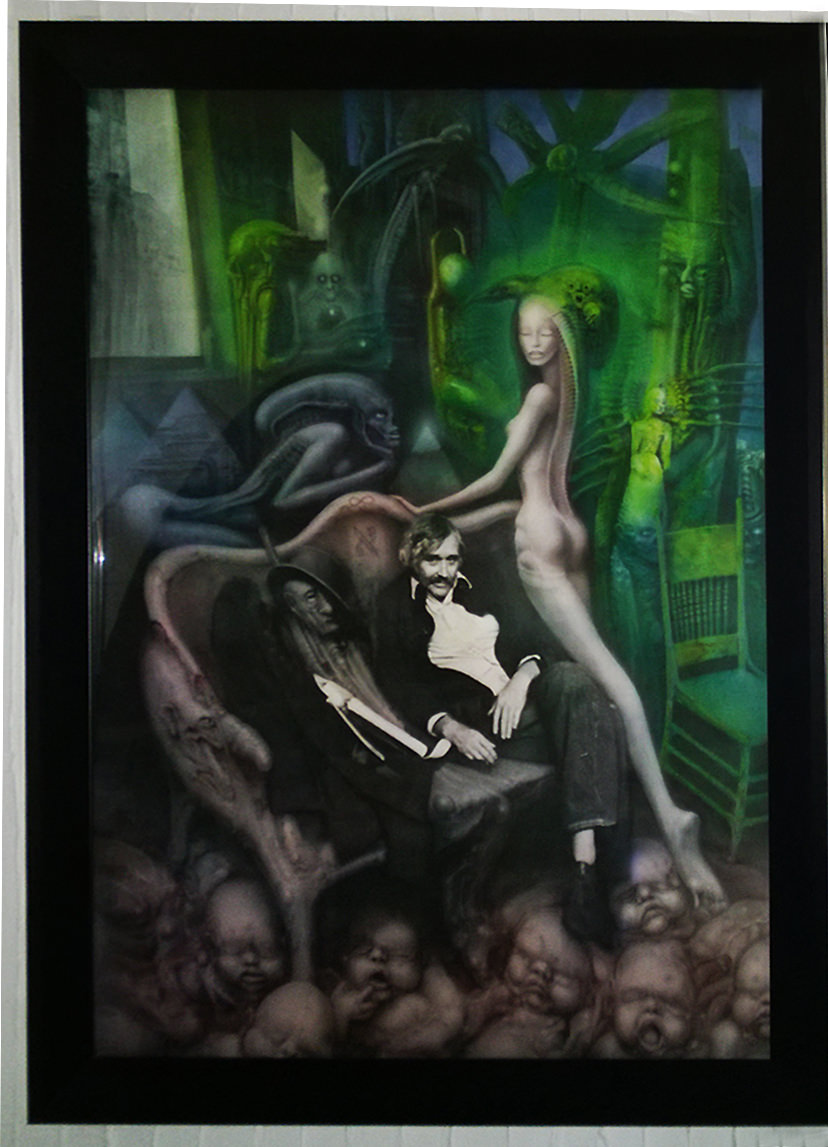 Friedrich Kuhn was an artist and companion by HR Giger.

In addition to the art, a close friendship has joined the two men.

A few months before Kuhn unexpected death Giger has made a photo of Kuhn showing him in casual attitude on his sofa.

To honor the great friendship, Giger has used the photo as base for a very impressive work.

Kuhn  is surrounded by strange creatures in a Giger typical world.

Friendly surround these beings Kuhn, and everything exudes a high degree of peace and harmony .

From this work, a very large graphic, in an Edition with only 170 copies, was published in 1975.

Printed with the best printing technology as a " photogravure "

Because Giger want to made this graphic more special, he overworked each sheet from the edition by hand with airbrush. 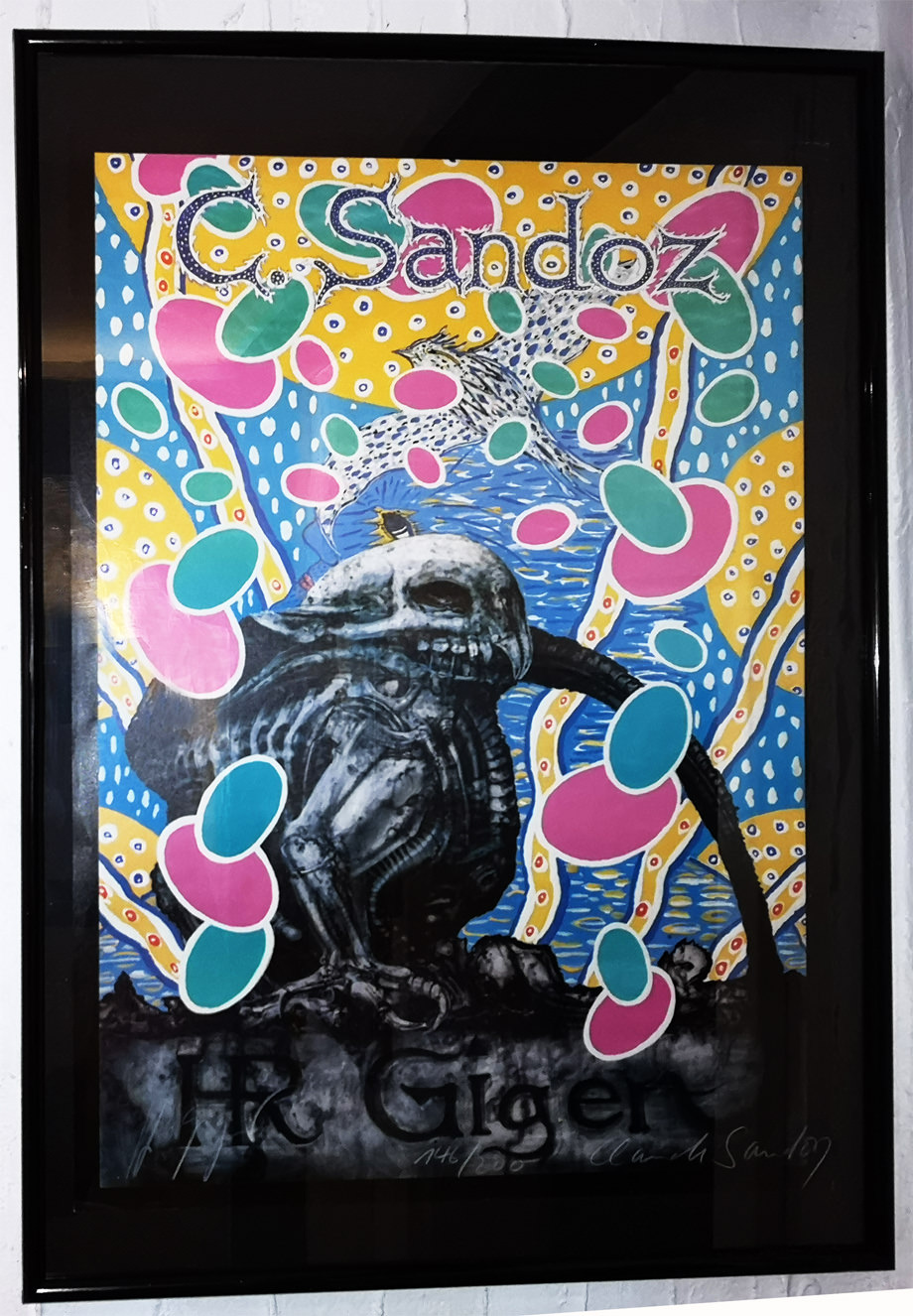 The "Plakat or Glarus" is a very extraordinary graphics.

Mid-1970s Giger and his friend C.Sandoz have worked together.

Although both artists art style is very different, it emerged works of great harmony.

The graphic shown above,  limited to 200 copies, was released in 1977 and is an example

of this unusual but fastzinierenden community work of the two artists. 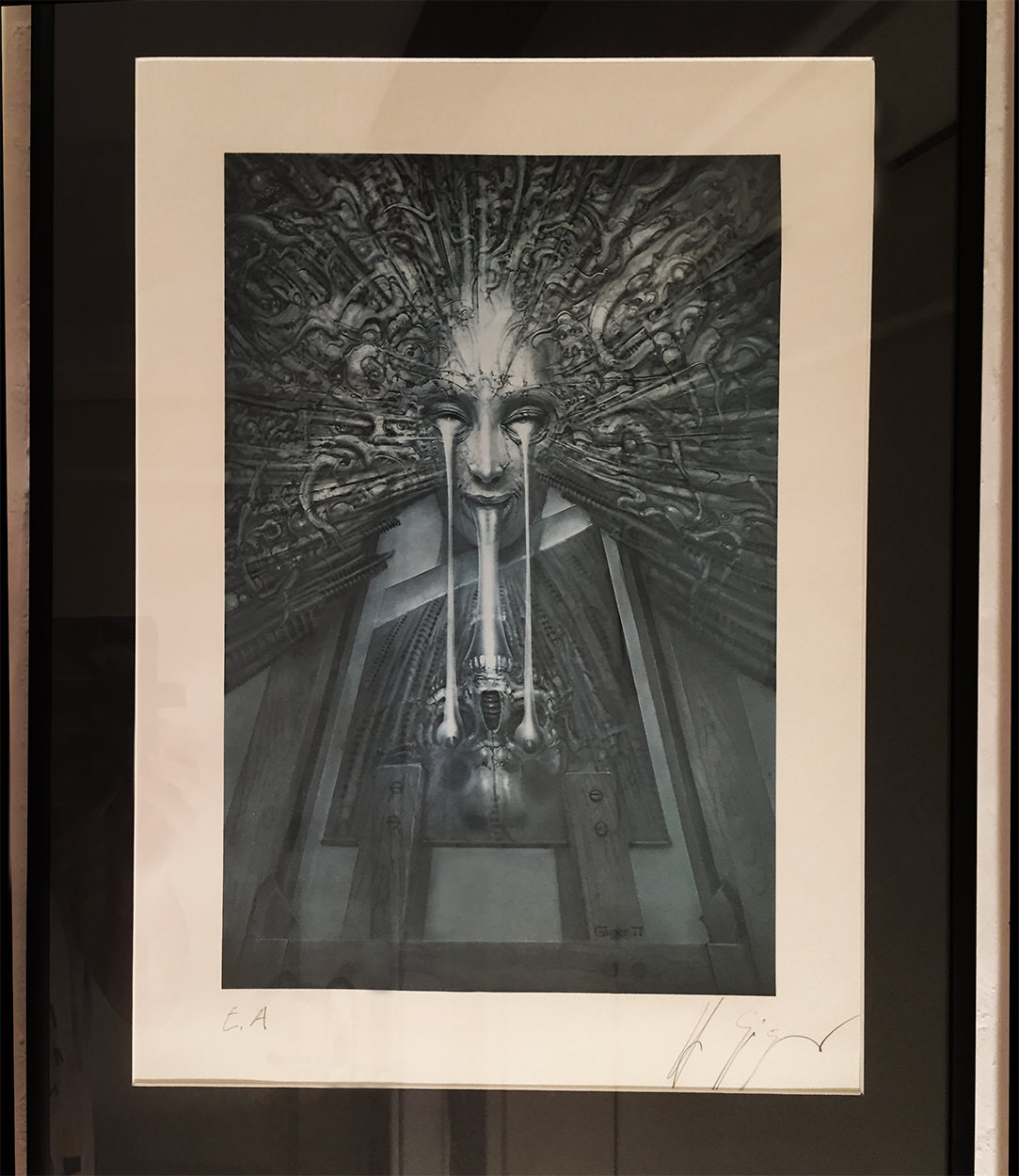 Published in a edition with only 60 copys 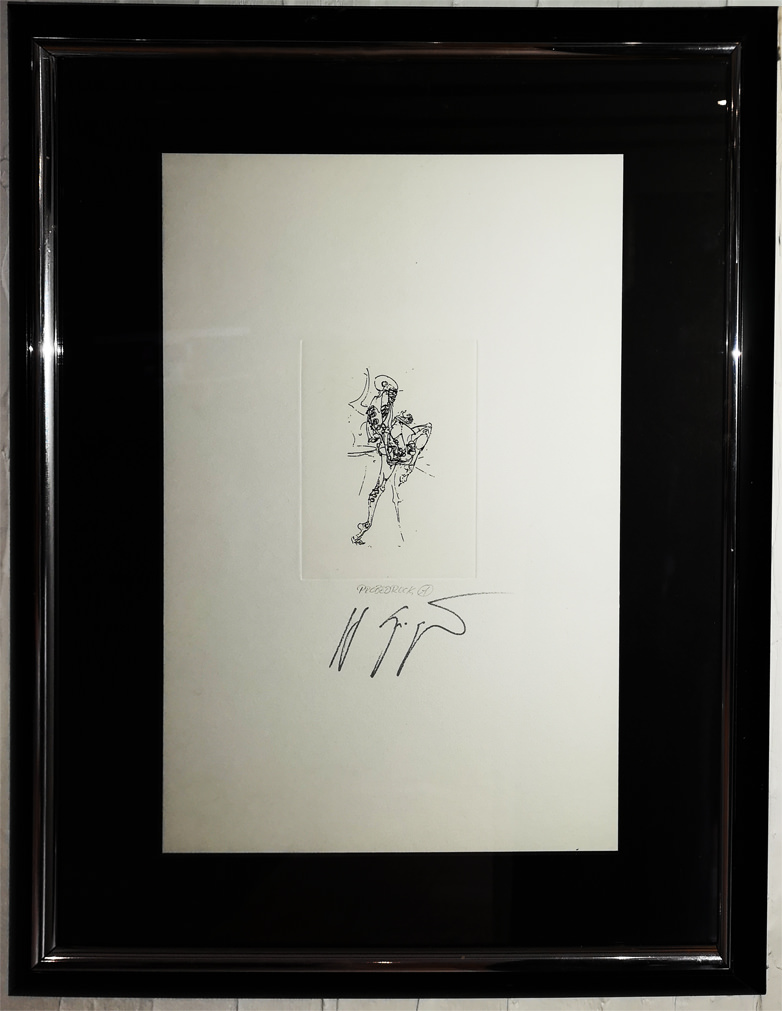 These small graphics is something special.

in a small Edition with only 66 copies on fine handmade paper.

The copy is from my collection is a proof-print outside of the regular Edition, handwritten marked by Giger: 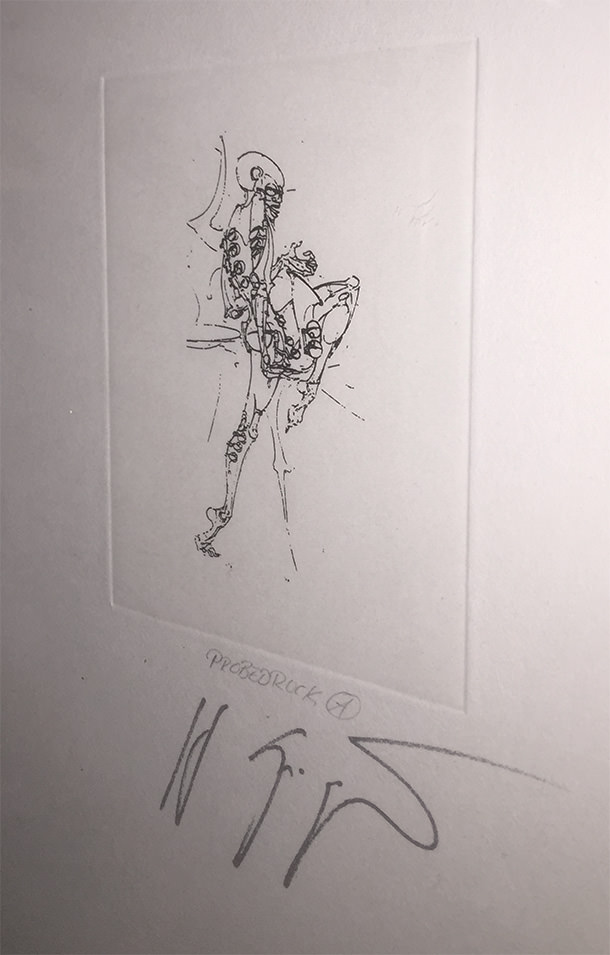 Such samples are very rare to find.

But what makes this copy even unique, is the fact that the motiv is mirror-image print in compare to the original drawing or the final edition with the litho.

So this litho is very unique 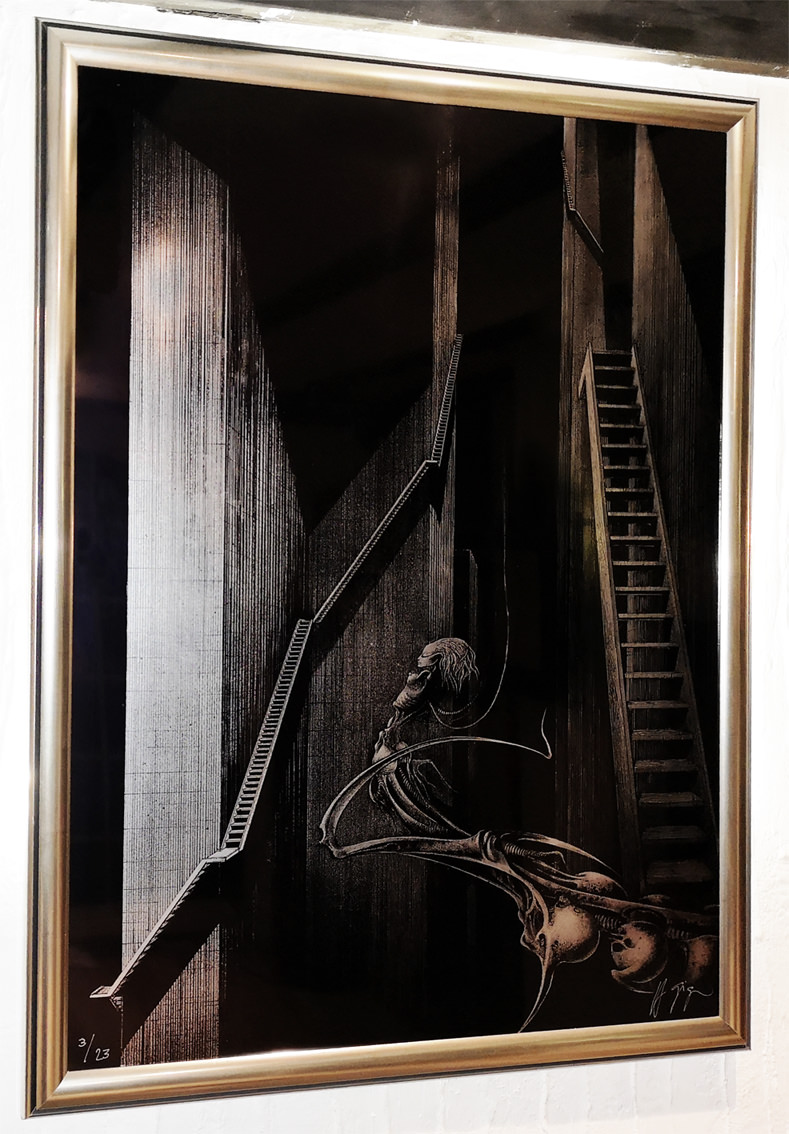 This piece is a very rare aluminium Eloxal
In the year 2001 Giger has chosen some of his early classical works to published them as Alu Eloxal´s
For a Eloxal a massive high-gloss polished aluminium plate serves as base.
On this plate, the black areas of the motives are applied, and in several complex process connected to the aluminum
Because of the shiny aluminum areas, and the deep black coating it comes to very impressive contrasts.
The unique effect can be seen unfortunately not good on photos.
Eight different motifs, in a very small Edition with only 23 copies were published
Of all motifs that were published  the "Shaft 7" work for me has the biggest fascination.
Giger takes us on his shaft work to mysterious places, where seemingly endless stairs are the only way to overthrow the looming abyss.
On the "Schacht7" is a  mysterious creature to see, that elegant fly through this strange world.
As a counterpoint to the obvious dangers emanating from the place, surrounds this creature a very calming aura
For me an absolute masterpiece of Giger.
Eloxal´s from Giger are offered incredibly rare because of the low edition.
Therefore, I am incredibly glad that i have now a copy from the "Schacht7" Eloxal in my collection
...and even that with the extremely low copy number 3/23 This drawing comes from the "drawing expanded" series.

In 1988 Giger has selected a series of drawings from his sketchbook, to reproduce them from the small format of the sketch book to a larger size.

The result are in size and appearance advanced (expandad) versions of the original work.

My work of this "expanded" series is the drawing named 'Hau den  Lukas'.

A unique version of this fair as it can be seen only Giger. 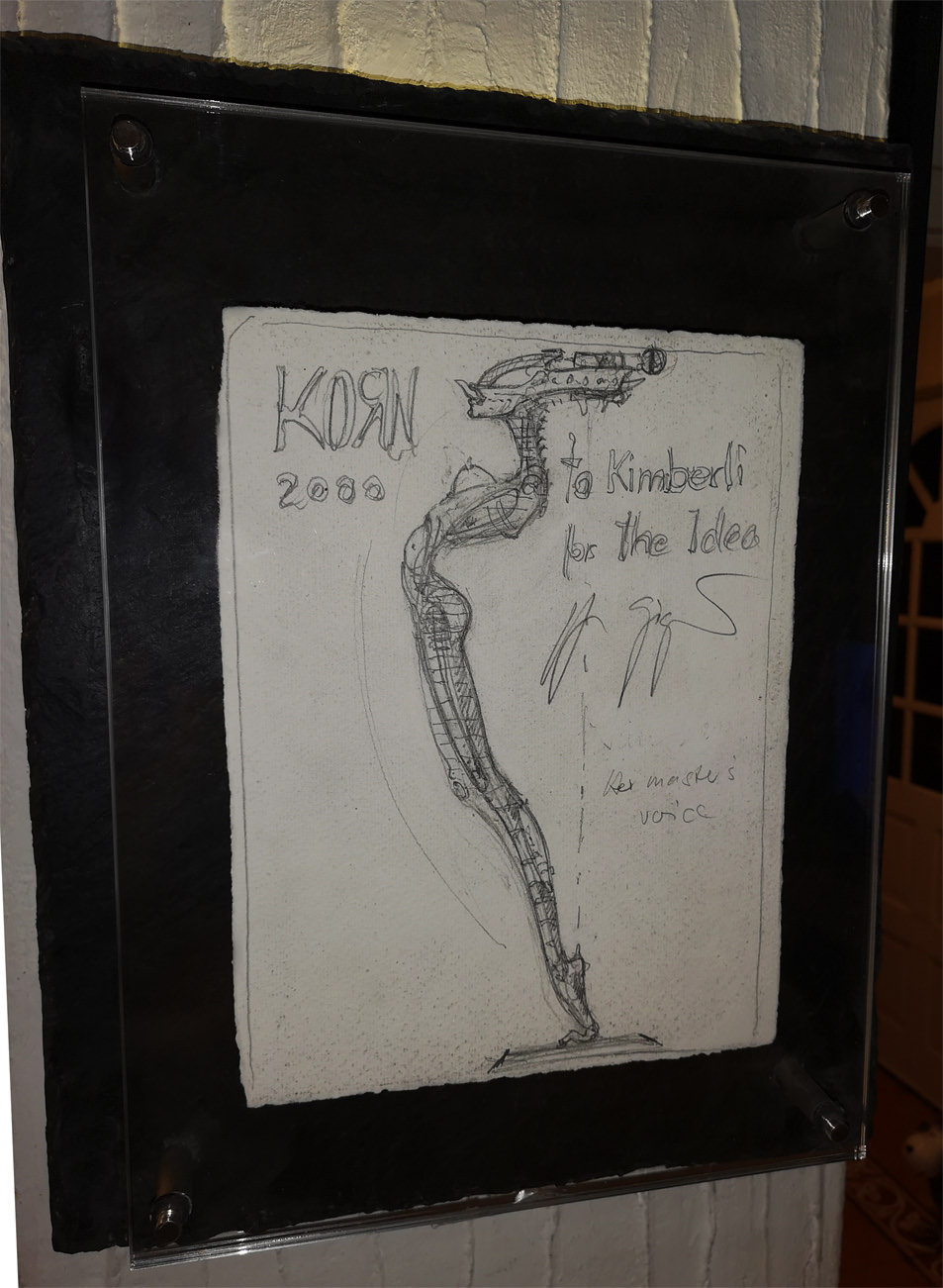 In the year 2000, Jonathan Davis' personal assistant, a woman by the name of Kimberli, had the great idea

to contact H.R. Giger and ask him to design a microphone stand for Jonathan Davis.

Jonathan liked the idea, so Kimberli contacted Giger's agent, to find out if Giger would be interested in such a commission.

It was agreed that Giger would be given total freedom to design anything he wanted without interference.

Later, after the mic-stand was finished and delivered, when Giger learned the identity of the woman

who suggested the idea to Jonathan, he made this drawing for her, as a way of thanking her and to give credit where credit was due.

The result of Gigers work is a stunning beauty, a sublime elegant sculpture with microphone as a Crown.

So uniquely awesome as it can create only Giger. 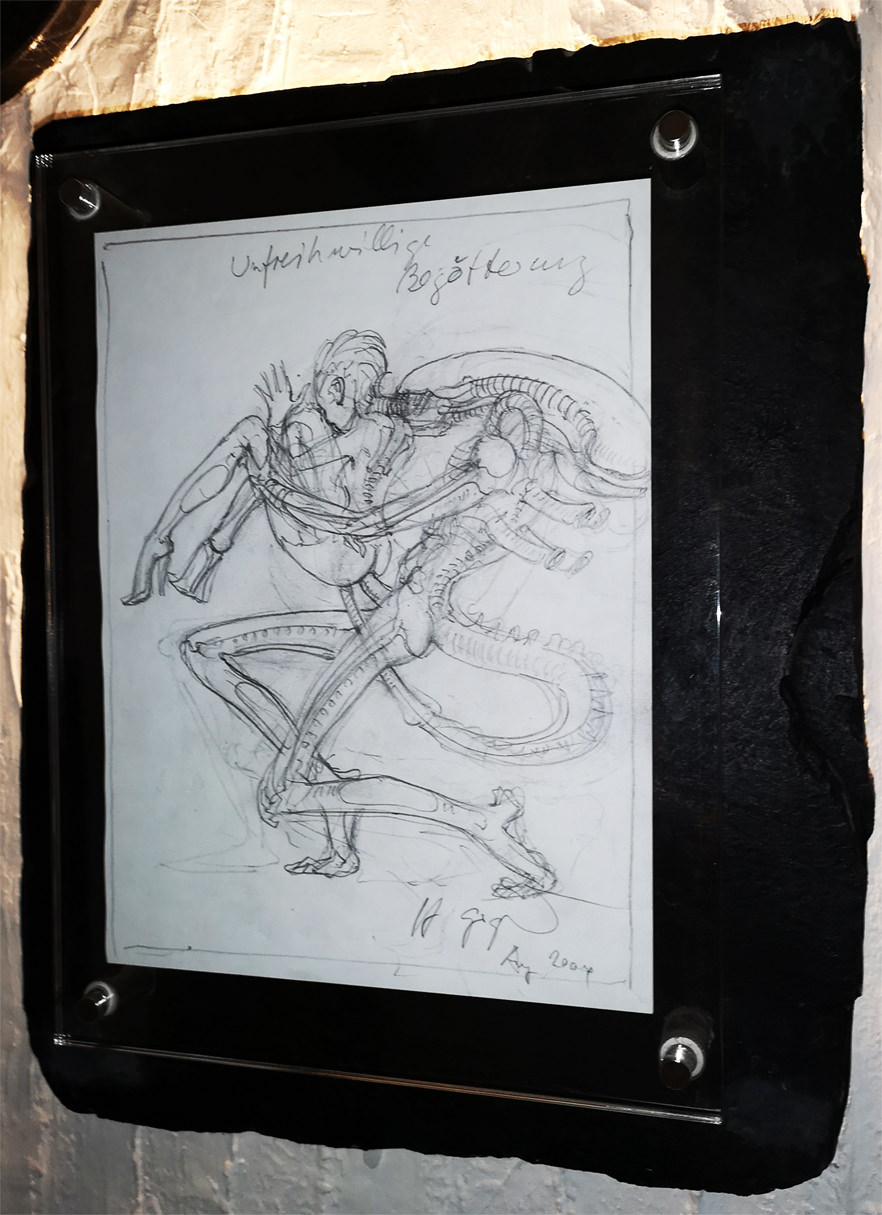 In 2005 the "Xenorotica" Portfolio was realesed in a editon with 66 exemplares. Each with six lithos.

Perhaps that was the reason why this drawing has been selected as a motif for the cover of the music CD/LP "Operatte Amorale": This work is not only the biggest but probably the most impressive original in my collection.

For this airbrushs Giger used for the first time perspective templates and reached even more intensive structures and patterns in the work.

The biomechanic landscape with the work-number 531 is on airbrush of this series.

The absolute highlight of my entrie collection

A personal handwritten note by Giger is located on the back of the work: 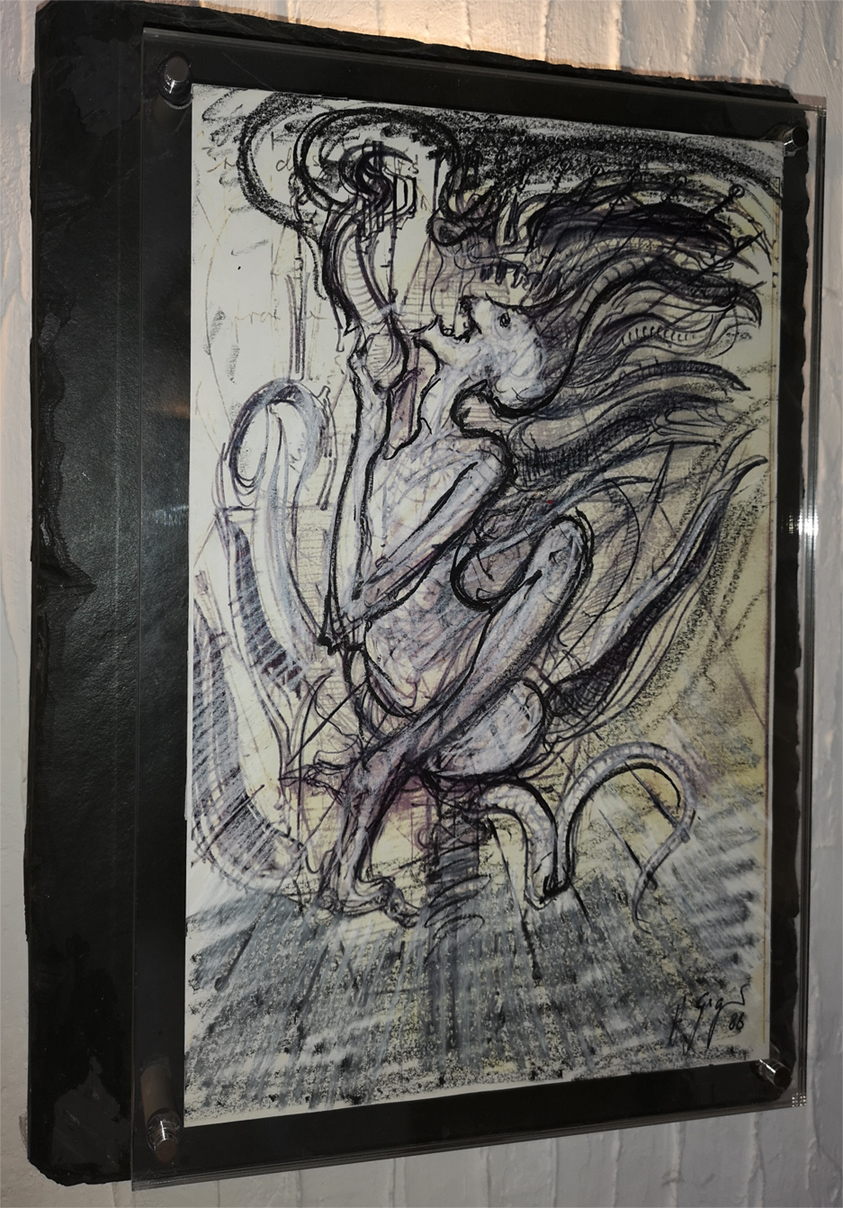 This work is the second Giger drawing from the "expanded drawing" serie in my collection.

Giger draw this large work in 1988 with coalpen, pencil and pastel on paper

The awesome motif make this drawing to one of the best of all "expanded" drawing works.

Giger use the same motif also for a large airbrush When Giger made this drawing in the year 1963 he was 23 years old and just in the first year at the art-school in Zurich.

The unmistakable uniqueness of his art is masterful and unrivaled.

To have such an early and extremely rare work in the collection is a great honor for me.

Without a doubt, this work is one of the most impressive pieces ever in my collection 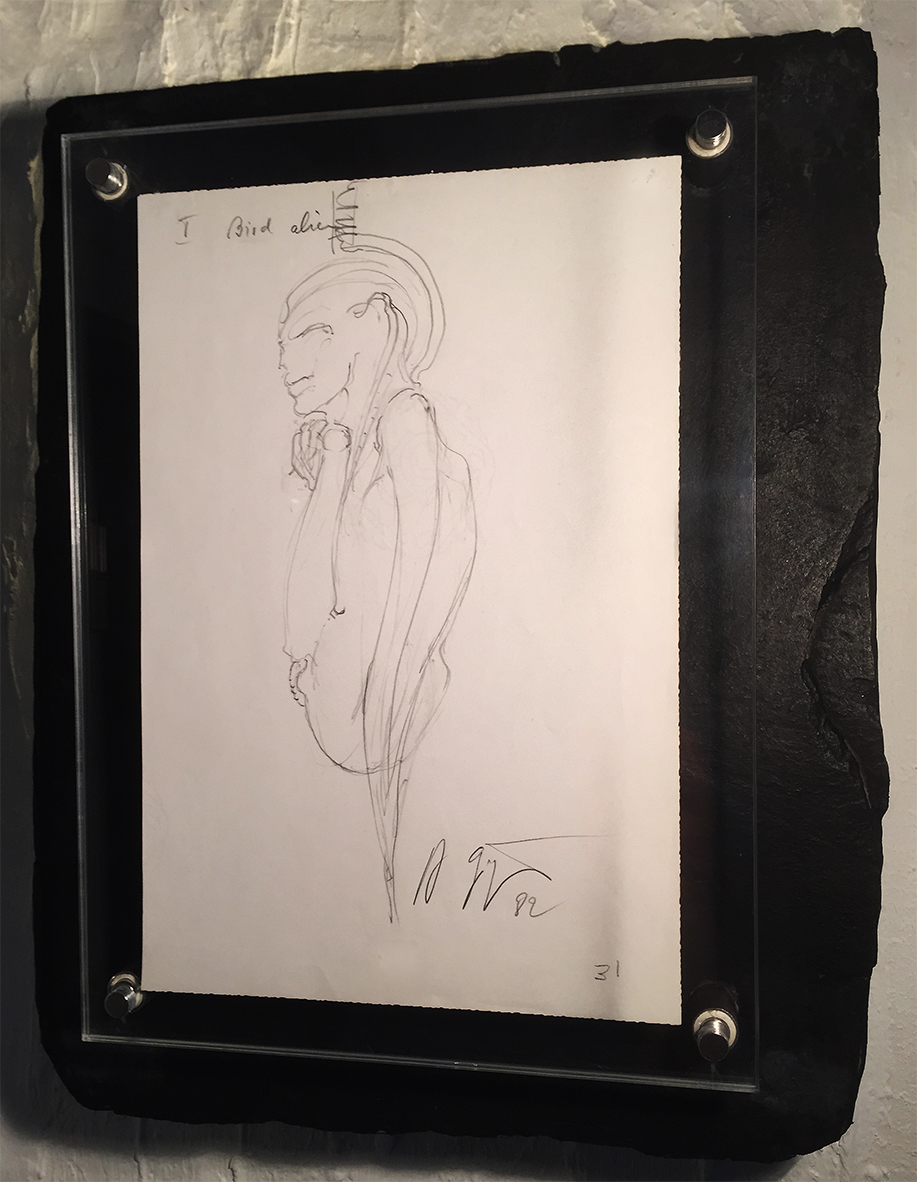 In 1982 the film project "the tourist" was developed by "Univeral" .

The story from the movie is about aliens who live undetected by the people on the Earth.

This alien are criminals, who are baned to earth when nothing else is hard enough.

So these intergalactic scum are deported to earth to live unrecognized between the mankind.

Giger was commissioned with the realization of different alien creatures.

So he created some large airbrushs and a series of drawings for "the tourist" .

The drawing above shown one of these alien creatures Giger created for the tourist project.

It's some kind of a bird-alien lifeform and Giger marked it also with "alien bird".

I am particularly pleased that this drawing is published in the giger book  "Giger film design" on page 47 : 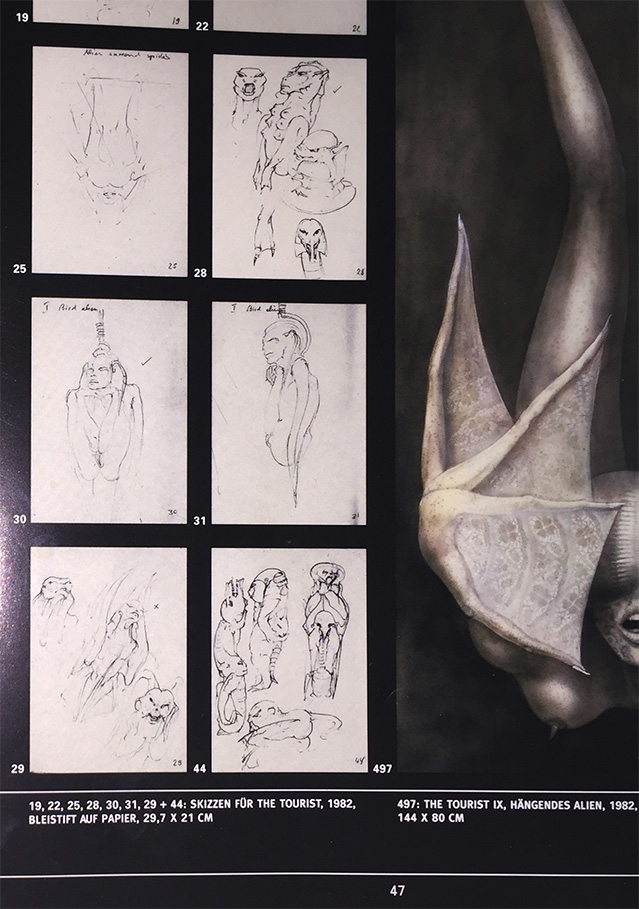 beautiful female Alien made of solid bronze in a limited edition

Here some Giger inspired  pieces,  made by unkown artists: Here an unusual interpretation of a living room table:

the alien was welded from countless metal parts to this impressive appearance.

Everything was used by the spark plug, clutch plates, springs to engine parts.

How much work and time has been necessary everyone can certainly imagine. In the desk, made of solid wood, a masterfully carved Necronom is embedded in the table top.

The Necronom is carved with great attention to detail from  full wood and is covered by a glass plate.

Here the table top in detail: A wonderful work in which the artist has shown impressively that he masterfully mastered his craft. early and rare posterprint from 1974 Limited to 250 copys artprint to the exhebition in Pau 2012 Some rare and special  books from my collection: Second work about Giger, appeared in 1974 in a limited edition with 3500 copies